Note to BugShotters – Over the holidays I read several books, two of which I recommend to you without hesitation.  The first is known to most of you and has been read by many so requires little explanation.  It is Piotr Naskrecki’s Hidden Kingdom.  While the camera’s focus is on insects of Costa Rica, the text expands to discuss characteristics of related insects beyond the political borders.   The insects are grouped by form (36 Orders plus a few Class, Phylum and Subphylum groupings) and function (defenses, deception/warning, communication, cooperation.)  The photography is stunning, the text engaging.  A worthy successor to Relics.

The forward to Hidden Kingdom is written by Edward O. Wilson, which brings us to the second book I recommend:  The Origins of Creativity, by Edward O. Wilson.  Wilson’s thesis is that biological evolution and cultural evolution are intertwined, and neither can be understood in isolation.  He acknowledges the importance and contributions of STEM fields, then points to the substantial underfunding and underappreciation of the humanities.   Our best hope for the future is for collaboration between the sciences and humanities.  Should you choose to read this book, tighten your seat belt!  To support his points, Wilson makes unexpected and sudden dives into art, music and philosophy.  Keeping up with his nimble mind is at times a dizzying and delightful ride.  His writing is clear and informative, yet can be lyrical and mesmerizing.  Some would argue that his book does not progress linearly, sometimes loops back and repeats itself, and never succinctly identifies the origins of creativity.  However, I was fascinated, read the book cover to cover, and now look forward to savoring it chapter by chapter. 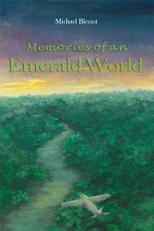 A holiday fable with year-round meaning,47 Minutes on Christmas Eve mixes everyday life and surreal imagery in a search for work-life balance in a digital age. Praised by John de Graaf, bestselling co-author of Affluenza, as “deep” and “memorable” with a “powerful and timely message,” it shows a way to find time when there seems to be no time, and how to hold on to the natural environment even when nature seems crowded out on all sides.

William Van Doren’s first job, after graduating from Johns Hopkins University, was as Senior Editor at the notorious Scott Meredith Literary Agency in New York, handling the work of Norman Mailer, P.G. Wodehouse, Dean R. Koontz, and others. He went on to ghostwrite or rewrite more than 50 books, starting with Meredith's biography of George S. Kaufman for Doubleday. In Los Angeles, while working a variety of jobs ranging from scraping paint off parking lots to proofreading Popular Hot Rodding and Wild World of Skateboarding, he created the innovative poster-sized periodical The Wall Paper, about which novelist Steve Erickson wrote: “The word and the image are one. The word is the image and the image is the word.” Van Doren’s professional film writing credits include the first-ever screen treatment based on discovery of the wreckage of the Titanic. His prize-winning ultra-short story, "The Last Page of My Great American Novel," was published in Streetlight. As an artist, in addition to many other works, he has painted every sunset since 1 January 2006, and posts these images online daily. Tragically, Bill passed away after an accident at his home in Charlottesville, Virginia...but his work lives on.

Treat Yourself! The editorial staff at Ancient Eagle Press has had the pleasure of reading some intriguing and entertaining books recently.  We recommend you consider adding the works of local authors William Van Doren,Michael Bleriot, amd Mo Barrett to your reading list.

Where Old Fliers Come to Roost

With that as guidance, Michael Bleriot takes us with him as he begins his adventures in the marginally-controlled airspace of Central and South America.  Loosely autobiographical, Memories of an Emerald World, The Jungle Express, Flying Nakedand Flying Naked II provide hours of entertainment and a glimpse into the life of an airman "alone and unafraid" above the jungle. 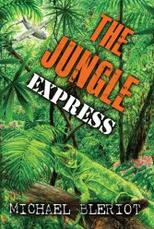 Author, aviator, Renaissance man, polyglot and reformed cowboy, Michael Bleriot is a pilot who flew for several years in Central and South America supporting the counter-drug effort. He flew out of the former Panama Canal Zone, where many of his stories are based. He went on to fly strat airlift and helicopters later in his career and now flies for a major airline

In her latest offering, Pardon My Quirk, anecdotist Mo Barret has employed her original recipe to cook up a delicious treat.   Starting with a cup of kindness, she cracks jokes in place of eggs, adds a small dose of self-deprecation, and fortifies it with irony.  The gluten holding this together is the Great American Metaphor, which she strains, beats, whips, and mixes liberally throughout the text.  You can read the entire book in the time it takes to cook, but don’t.  The chapters are life lessons, some a bit spicy, finished with questions designed to make you consider aspects of your own life that you may have glazed over.  Take the time to digest them.  These are bite sized pieces worthy of savoring.  (If you opt for the e-book, they are killer byte sized pieces.)   The long and short of it is that Barrett uses her long memory and short attention span to deliver a dish that will stir you, shake up your prejudices, and leave you wanting a second helping. 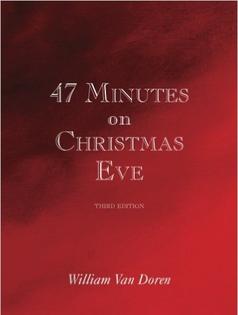 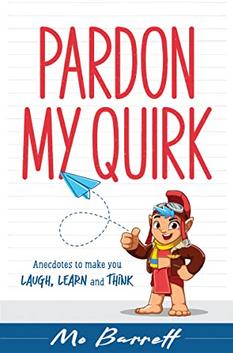